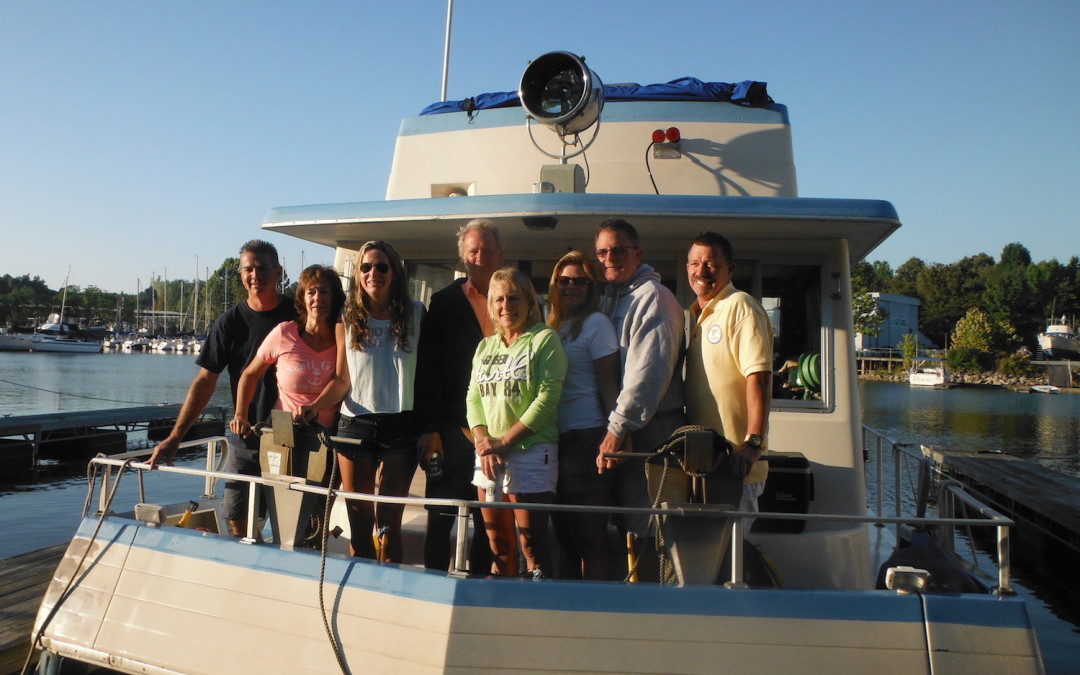 Just like there’s more than one way to skin a cat, traveling the entire length Mississippi River can be done in a number of fashions. Every year, in fact, hundreds of people “thru-boat” Old Man River in everything from handmade rafts to luxury yachts. No one way is better than another, but regardless of how you do it, the result is sure to be an experience you’ll never forget.

We recently caught up with three groups that conquered the mighty Mississippi in three very different ways last year — each facing its own challenges and rewards. Here are their stories.

This Old Houseboat
To Lisa Penn and John McCabe, Scott Bolster and Jody Vincent, Bill and Annette Hamilton, and Wyatt Gillespie and Sandy Biermann, buying a fixer-upper houseboat for a trip down the Mississippi and then selling it at the end sounded like a grand adventure. The couples from Iowa have been friends for years and had already taken some “non-standard” trips together (four-wheeling and zip-lining excursions, and exploring Mexico in rented Jeeps).

For its floating renovation, the group bought a 43-foot Nautaline circa 1974 that had been sitting out of the water for a couple years in LeClaire, Iowa. “We didn’t want anything elaborate,” said Vincent. “We just wanted to the get to the Gulf.”

Replacing the outdrives was the biggest improvement the group made before taking off on September 12, 2014. They also fixed a problem with the generator’s distributor, tuned the engine and replaced some belts — and brought lots of tools and spare parts, just in case.

The crew carefully planned the route; they would spend 14 days aboard, running 10 to 11 hours a day at around 10 miles per hour, eventually traveling 1,260 miles to the Gulf of Mexico. They would stop and tie up every night and eat dinners out.

Soon enough after beginning their trip, everyone settled into various roles and routines. Bolster took care of mechanical issues; McCabe was the pilot; Gillespie was the navigator; and Penn became the photographer and blogger. The group members said they found it interesting how everybody worked together and found a role, especially not knowing at the beginning what was going to happen.

The only major mechanical problems came after they took on some bad gas, forcing them to change and clean the fuel separating filters several times an hour for a day and a half. Water seeping into the cuddy cabin was solved by installing a new bilge pump float switch. Other issues were less severe: The close sleeping quarters brought complaints about snoring, and the ladies said they had to beg to use the generator because the guys claimed it was a gas hog.

In the end, though, the couples agreed that the trip went far smoother than any of their expectations. “We’re all still friends and planning our next trip,” said Lisa. The boat’s name, It’s All Good, summed up what for them was an incredible experience.

This included selling the boat online, so that the new owner was there when they docked for the last time in Mobile Bay. Between buying and selling the boat, fixing it up, and paying for fuel and dockage, the trip cost each couple $300. Not bad at all for a two-week vacation on the water with great friends.

Paddle for a Cause
Getting to the Gulf from the Mississippi River’s headwaters at Lake Itasca, Minn., was far more trying for four Ohio college students — Tony Yandek, Conor Emser, Evan Weisenberger and Beau Hartman — who made the 53-day, 2,300-mile trip in kayaks. 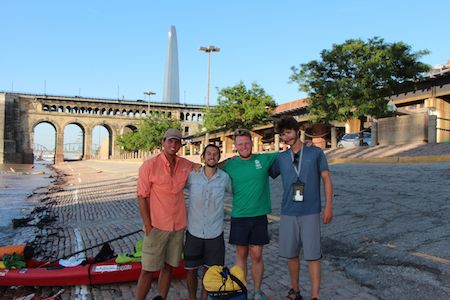 Conceived as a “creative endeavor” to raise awareness about affordable housing, it was also a significant personal challenge for each of them. None of the four had any significant kayaking experience. In fact, the first time Emser kayaked was when he put his boat in the water in Lake Itasca.

The paddlers quickly learned that rain, wind, aching muscles, overturned boats, and losing items like glasses and shoes in the water was just part of the deal. Each carried two-gallon water containers that lasted a couple days, so finding places to refill their reserves was a constant task. When they pulled off the river in one promising spot, they were informed they were on the grounds of a casino and were given a lecture about private property before being told to leave.

Other challenges included cooking the high-starch, high-calorie dinners they needed to keep their physical strength up, and, of course, the weather. Finding a dry, all-you-can eat pizza place became a quest. Only one night did they stay in a motel; many nights were spent camping in the rain.

The group had planned on making about 50 miles a day but, towards the end, had to push to 70 or 80 miles a day. As they paddled constantly day in and day out, they sometimes reached the point where “you stop feeling your arms,” said Hartman.

The kayakers’ route differed from the other two groups in that they chose to paddle down the Lower Mississippi. Few non-commercial vessels dare to venture here, and the vast isolation is very unlike the more populated and scenic water north of St. Louis. At one point between Baton Rouge and New Orleans, with huge tows and barges everywhere, Hartman remembers thinking, “We should not be paddling here.”

The challenges were both mental and physical. “It was absolutely the most difficult thing I’ve ever done in my life,” Hartman said, calling it “type 3 fun,” something that’s enjoyable only when it is over.

But the thrill came from overcoming the challenges, volunteering at seven Habitat for Humanity sites and being humbled by the constant gifts of “river magic,” where people befriended them in unexpected ways. One man literally gave them the shirt off his back, then his sunglasses.

The unique combination of good and bad times, physical exhaustion and mental renewal gave them bragging rights to a trip that few people can imagine doing.

Rocking the River
Traveling to raise awareness for a good cause was also part of the motivation for Rich Bassford and Robb Osborn’s seven-day, 1,320-mile Jet Ski cruise of the Mississippi River. They gave 100 percent of the $15,000 they raised to the Children’s Miracle Network while enjoying a great trip at the same time. 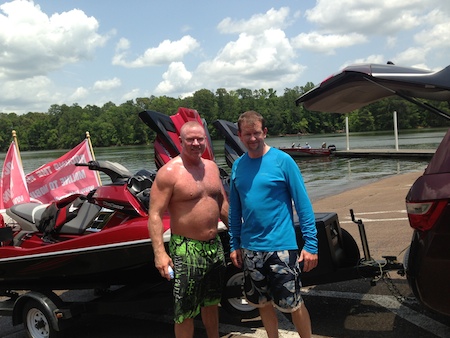 To prepare for the extended run, their Jet Skis were outfitted with GPS systems and lightweight, custom racks that held four five-gallon gas tanks and a 20-gallon cooler. In addition, each personal watercraft had a $3,000 stereo system, leading to the trip’s motto of “Rocking the River,” which was printed on the flags they flew.

Both full-time businessmen, Bassford and Osborn planned the trip to take only seven days. This called for a 35-mph cruising speed and took into account stopping at numerous beaches along the way to meet and greet (but not party with) the locals. The pair’s longest day ended up being 220 miles.

The parents of both men helped with support, so they could put the sleds on trailers and inspect them every night, then find a place to stay. But on the first night out, before Osborn’s parents could join them, the pair arrived at a town where there was a motorcycle convention and had to hitchhike to the only available motel they could find with their clothes in a garbage bag.

Along with endless bottles of Gatorade, the riders consumed quantities of beef jerky to stay energized during the eight- to nine-hour days. At night, the SAG wagon took them to restaurants and grocery stores.

Unfortunately for Osborn, his Jet Ski suffered what they thought was a blown engine after billowing white smoke on Kentucky Lake. With no oil showing on the dipstick and facing the prospect of having to quit, the pair had the watercraft towed to Paul Seaton Sales & Service in Counce, Tenn., and bought a new one. The dealership kindly let Osborn use its shop to transfer the add-ons to the new sled.

Like the other river travelers, Bassford and Osborne said meeting folks and telling and hearing stories was a highlight of the trip. The only “low-light,” besides the mechanical issue, was getting beat up by wind and waves on Mobile Bay for three and a half hours, where their speed was reduced to almost nothing.

“The beating we took on Mobile Bay was like no other day that I’ve been on the water,” said Osborne. “We were so waterlogged and tired we only made it by knowing that we were almost there.”

His advice to others considering a trip of the entire Mississippi: “Plan, plan, plan” and “Don’t get into a situation where you don’t know what you’re getting into.”

Osborne said his next quest might be a whirlwind Jet Ski circumnavigation of the Great Loop. Regardless of any hardships from his Mississippi adventure, he concluded, “I have an amazing story for the rest of my life.”