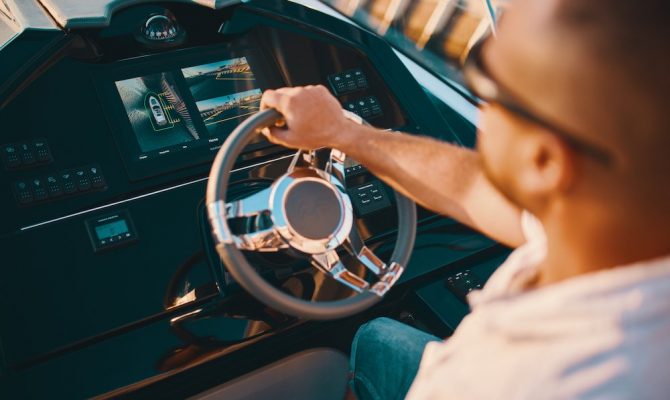 News
According to a recent news release by Garmin International, they have released a Surround View Camera System, a breakthrough in video guidance for recreational boating and yachting. Utilizing six through-hull mounted cameras that act like multiple sets of eyes, Surround View provides a live 360-degree bird’s-eye view around the vessel to help captains quickly view their vessel’s perimeter during low-speed maneuvers, such as docking, from the helm.

“Our innovative Surround View brings the comforts and conveniences our customers rely on in their vehicles to the helm of their yacht to help captains see as much of their environment as possible for easier maneuvering on the water,” said Dan Bartel, Garmin vice president of global consumer sales. “Until now, no other marine camera technology has offered a true 360-degree bird’s-eye view, a vantage point that can help reduce the stress of docking and navigating marinas, narrow causeways and busy channels by giving captains a live look at their surroundings.”

Maximized visibility at the helm

The technology uses six 1080p cameras located around the vessel: a forward-looking camera at the bow, a rear-looking camera on the aft, and two side-looking cameras on both the port and starboard sides. When the system is engaged, it displays a full overhead stitched image with 360-degree real-time video views from around the vessel directly to compatible Garmin chartplotters or multi-function (MFD) helm displays. Designed to maximize visibility and minimize blind spots, captains can view one or two cameras simultaneously with the bird’s-eye image, and even zoom in and pan around on an area of interest from any of the individual camera views.

Designed for a broad range of boats, the Surround View cameras have a low-profile for OEM factory-installed through-hull mounting that blends functionality with streamlined aesthetics. A compatible Garmin chartplotter or MFD, including the GPSMAP® 8400/8600, GPSMAP 7×3/9×3/12×3 series or the Volvo Penta Glass Cockpit System, is required.