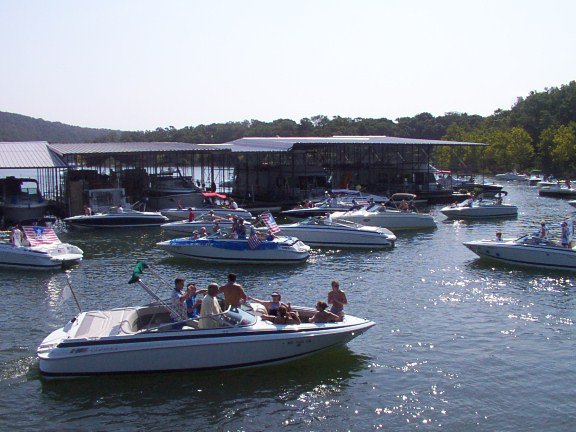 When Gene and Nancy Stimble bought Campbell Point Marina in 1995, the marina on Table Rock Lake in Shell Knob, Missouri, had already been serving boaters for more than 30 years. Over the past 20 years, through weather events that included two floods, an ice storm and, most recently, a tornado, the Stimbles have been making upgrades. Now, with an almost all-new marina, they are looking forward to the 2016 boating season.

A tornado in 2014 lifted their Pier 6 houseboat dock and threw it across Pier 5. “The rest of the docks were back further in the cove; they got blown around a bit, but other than that we didn’t have any damage,” Gene Stimble said. MariCorps U.S. built and installed new docks for Piers 5 and 6, replacing the wooden docks with concrete floating docks.

“One reason the tornado picked up the dock so easily was because it was light — wood and encapsulated foam,” Stimble said. “When you add the concrete to it, it helps weigh the dock down so the wind doesn’t affect it as much.”

MariCorps reconfigured Pier 6 as well. Instead of slips on both sides of the walkway, the new dock has slips on the backside of the wall and a wave attenuator on the front. “The wall protects the slips so that they don’t get the wave action in the slips anymore,” Stimble said. The new slips are larger — 20 feet by 60 feet instead of the previous 18 feet by 56 feet — and the dock was expanded to make the wave wall more effective.

Last year, MariCorps built floating docks for the greatly expanded ships store. “We went from a single level store to a double-level store with a hip roof,” Stimble said. “The recreation on the lake has expanded so much, we needed more room.” The marina also had MariCorps replace its transient dock, which now includes 24 covered docks.

Stimble said the marina has been completely rebuilt since 2008. “In that year, we had one walkway and one massive conglomeration of docks. That year we had a huge flood — the first major flood on this lake — and that set us back a little. In 2009, we had a major ice storm that collapsed a lot of our docks; many of them were old, wooden structures.

“So, that year we decided to redesign the whole marina. We went to a finger system, and initially put walkways from each pier to the shore. But then we had another major flood and we couldn’t get all the walkways to the shore anymore. So, we took some of the walkways, turned them sideways and connected the piers together so you can get anywhere on the marina. We only have three walkways going to shore now,” Stimble said. “When we hooked up walkways, we put everything on swivel points, so they move around and nothing breaks. I no longer get nervous every time the wind blows, and my maintenance has gone to nothing.”

Stimble hopes to add dry storage to Campbell Point within the next three to four years. “We’d start off with a 150-boat building, and when that fills, we’d tear the back off the building and add on to it,” he said. “We’re pretty much maxed out on the water, so we are looking at trying to accommodate people through a high and dry system.”