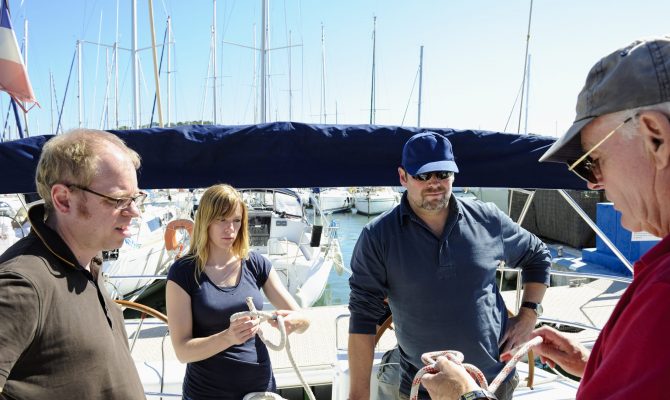 As you’re preparing for that summer cruise, here are a few “tricks of the trade” that could make your life easier. Sure, you’re familiar with some of this stuff, but if you’re not out there 24/7, important skills can get buried in the aft locker. Plus, as you read this article, you’ll likely recall other procedures and techniques that you haven’t used in a while — and you’ll be quicker on the uptake when you need them again.

If you’re running a single-screw cruiser, odds are it has a right-hand prop. Therefore, it will want to kick to port when backing. If you have a choice, it will tuck in easier on a portside docking.

When you’re maneuvering with twins, an easy memory aid is to think of doing The Twist. If you’re standing facing forward and you twist to the left with your right hand on the shift lever, thereby pushing it forward, the bow is going to turn to port — and vice-versa. Naturally, it will be quicker and tighter when you follow through with the other hand in reverse. Since you’re using just throttle/shift when maneuvering that twin around the dock, make sure the rudder is centered for no surprises when easing one way or the other. Thanks, Chubby.

When I’m docking a flybridge cruiser single-handed, I loop bow and stern lines leading amidships — safely inside the railings, of course, so there’s no chance they’ll flop outboard — and bungee a boathook to the ladder or step railing. I pull up so a cleat or piling is also about amidships, then I grab the boathook on the way down, snag the cleat to hold the boat in close, and place those fore and aft loops around the cleat or piling and haul them tight from inside the boat. That way, there’s no need for death-defying, boat-to-dock leaps. When it’s secure, I’ll step ashore and tie up properly.

Working the trim tabs properly saves fuel and increases efficiency. Tab the bow down in short bursts as you’re running and reset them frequently, especially as fuel burns off and water conditions and weight distribution change.

Eyeball pilings and buoys as you’re cruising tidal areas. When they’re leaving a wake behind them, you can figure the direction and strength of the current.

After cruising for a while, recheck the bilges and all secured gear. Also, get in the engine room regularly — at least every hour. That’s when you’ll spot the flopping loose belts, the fine spray from fuel and water hoses that are about to let go, and the warning spark or odor of imminent electrical failure. If you sniff the unmistakable odor of hot antifreeze, you have a cooling system leak.

If you’re berthing at a strange dock and need to make a quick decision as to which side to lay, check for surrounding moored or anchored vessels. They’ll be pointing into the dominating wind/current, and that’s the side you want.

Prior to backing with a dinghy astern, shorten the painter, allowing the dinghy to swing alongside the boat as you back. Then, secure an additional line from the dinghy’s stern to an amidships or forward cleat of your boat. 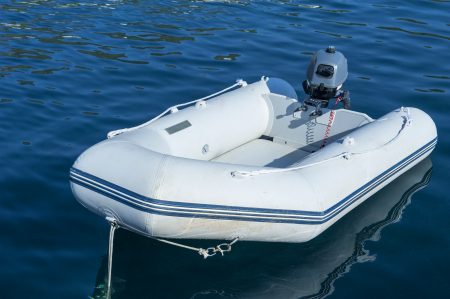 Snagged a line in the prop? Don’t even think of reversing (or forwarding) it out. It won’t work. Shut down immediately if the line didn’t do it for you. Think about installing a line-cutting device — they work.

The same applies to groundings. The safest course of action is to cut the ignition at once, safeguarding the propeller and gears. Never back off until you’ve determined the extent of damage and that you’re not taking on water.

In straight river sections, the channel is usually in the middle. Where a river bends, however, the current swings wide and the outside of the curve will have deeper water. On the inside, sand and silt will build, creating shoals. That’s why it’s poor practice to cut across bends in rivers. 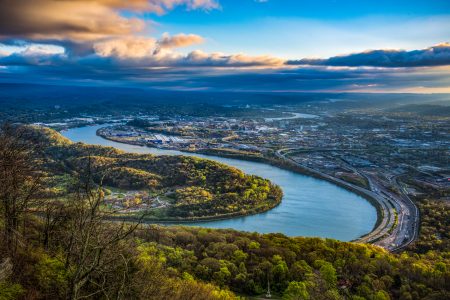 Keep your bow or stern into the current when waiting on a bridge. As a rule, the down-current vessel has right-of-way when going through. Heavy traffic? They’re all on that bridge channel (09/16 in Florida; 13/16 everywhere else). It won’t hurt to give a “security” call as you move through. Be careful when sharing the opening with a sailboat. You might think there’s plenty of room, but the sailor will always shoot for mid-channel.

When traveling on a river, always know your position and the location of the next lock and dam. It’s often impossible to see a dam from upstream, and most boaters who go over one either didn’t know it was there or thought it was farther away

As you approach a lock, stay in the channel and hold station about 400 feet from the end of the lock walls. Be aware that currents can be strong, especially when the lock gates open. Hail the lock on VHF channel 16/14/13 for instructions. Make sure you have fenders on the sides of your boat and both a bow and stern line of at least 50 feet, along with someone standing by to pay out or take in line as the water level in the lock rises or falls. Always follow the lockmaster’s orders with regard to vessel priority, placement and so forth. 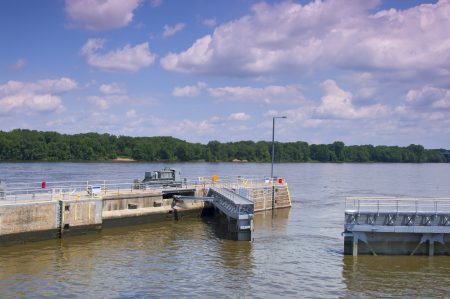 When the sky looks threatening and weather advisories are forecast, I like to keep my radar unit on the 3- to 5-mile range. That’s best for picking up a fast-moving thunderstorm well before the first gusts hit. The mottled picture of that storm will look like a horde of angry bees working across the screen.

You’ll feel a drop in temperature just before the first blast of that T-storm cell. Then, the wind will come on fast and hard. Generally, you can breathe easier once the torrential rains begin as, by then, the wind and lightning are usually past. But when one storm goes through, there’s often another right behind it. 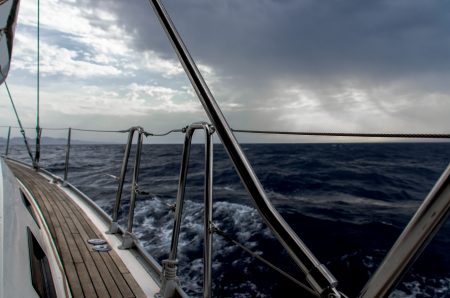 A storm rolling in

When anchoring, don’t drop the whole shooting match — chain and rode — then back off and hope it sets. It’ll just pile up underneath. Lower the hook until it hits the bottom and then slowly back down, paying out rode until about 3/4 of the desired scope is down. Secure the line, ease back until it’s set, then let go the rest of the scope and ease back again.

Never anchor in the channel, especially at night. Beaching is a good option for an overnight stay, but be wary of rocks or snags as you approach the shore. Come in at bare steerageway with the prop disengaged. Once the bow touches, apply enough pressure to set your boat firmly on the bank. To secure the boat, attach a line from each amidships or stern cleat to a tree on shore at about a 45-degree angle. This will wedge you in place.

Braided docking lines are slippery and can work loose under a load. When securing these lines, use a full wrap around the base of the cleat, at least two figure eights and a half hitch. If you don’t have cleat room for properly sized braided lines, consider three-strand nylon, as it will grab better without the need for as many turns. 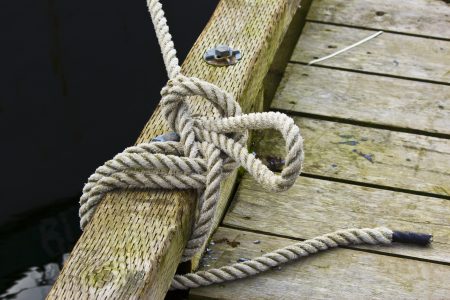 Sure, we run dead slow in deep fog, but it also pays to stop, shut down and listen periodically — especially if you’re near a shipping lane. If you hear anything alarming (like a loud, nearby fog horn), remember that commercial traffic almost always monitors channel 13. Give a shout. They’ll be glad to hear from you.

Your instrument lights are probably already red-tinged, but consider red filters for your interior lights, too, before embarking on night runs. The constant adjustments and readjustments as you go below create eyestrain and fatigue.