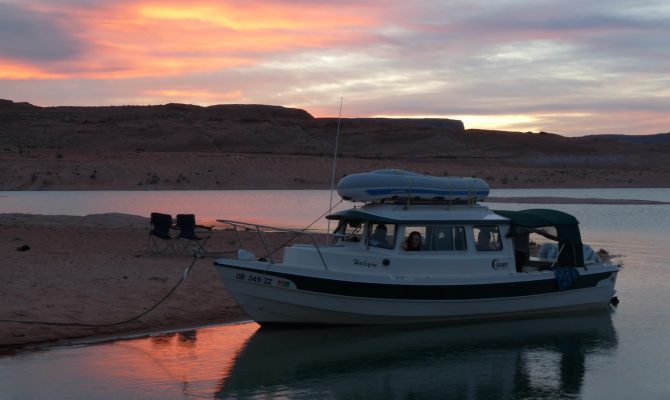 We were in Eufaula to service engines and provision. The town, built on the bluffs over the Chattahoochee River and on the site of a former Creek village, is one of the beauties of Alabama. Brilliant azaleas and dogwoods bloomed along the broad avenues. The finest of a bygone era line the streets — Greek Revival cottages to Italianate grandeur. This aristocratic river town preserves its 19th Century history. Visit in early April to take part in the Pilgrimage, Alabama’s oldest Tour of Homes.

We enjoyed the beauties of Eufaula and its fine eating places, but it was time to get back on the water. We had completed three of Alabama’s six navigable rivers: the Tennessee, Tombigbee and Black Warrior. There were three to go: the Chattahoochee, Mobile and Alabama. We examined the charts that our friend, Pat Byrd, had loaned us. It quickly became evident that there was a marvelous possibility.

When we reached the Gulf, we could hook a hard turn to starboard into the Gulf

Intracoastal Waterway. The GIWW is our old friend. We had cruised it from Mexico to Florida. Traveling westerly, we would come to Mobile Bay. If we went up the bay and through the town of Mobile, we would meet the Mobile River. Almost 50 miles north, the Alabama River flows into the Mobile. We could take the right fork and continue all the way up to Montgomery, Alabama. The whole trip looked to be about 800 nautical miles, and we would end up only 100 miles away from our starting point.

And so we did.

“What a marvelous cruise,” El continued enthusiastically, “Southerly along the Georgia-Alabama border, then to saltwater and seafood, and finally north through Mobile and the wilds of the Alabama River. Let’s do it!”

“I don’t know, hon,” said the conservative one. “The water connects, but will there be fuel stops for us? It looks pretty wild and lonely. We’ve never heard of anyone doing it, and there might be a good reason.”

We did, and found there would be no problem along the eastern and southern portions of The Horseshoe. The western arm looked iffy. From Mobile to Sand Creek Marina on the Alabama, a distance of about 170 miles, there was no obvious place to find gas. Our guidebook, however, gave several phone numbers to call along that route to contact folks who would deliver gas.

“We’re off,” said El, and the next day we launched at Lakepoint State Park. 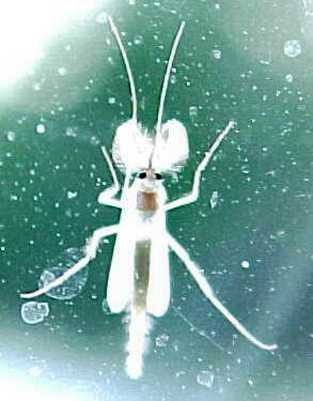 The Mobile River flows southerly into Mobile Bay, where it forms a large delta. Looking at the chart as we came up to Mobile from the south, there was a wonderful confusion of anastomosing streams, canals and inlets through the delta. The route up the Mobile River is, however, easy to determine. The city of Mobile was built on the westerly of the channels through the delta, so one simply follows the ship buoyage into the city, goes past all the docks and keeps heading north. The river has active barge traffic, being the end of the Tenn-Tom Waterway. The buoys can guide you all the way to Kentucky and beyond.

There was the temptation to explore the delta. So many choices. The alternatives cast a siren spell with names that have a haunting appeal to the nomadic boater: Spanish River, Polecat Bay, Chocolotta Bay, Pass Picuda, Game Warden’s Ditch, Bay Minette, Chickasaw Creek, Chuckfee Bay, Raft River, Big Bayou Canot, Little Bateau Bay. There was plenty of water to poke around in, and many stories to read. Why, the last great battle of the Civil War was fought there in the delta. It was actually fought after General Lee’s surrender and the war was over — but news traveled slowly then, and many men died.

The clouds were gathering, however, as we started our cruise through the delta. NOAA was calling for thunderstorms, “some possibly severe, with damaging lightning, high winds and large hail.” Temptation resisted, we pushed on up the Mobile River to the junction with the Alabama. We passed a southbound tow pushing a barge full of logs.

“How’s the water level up the Alabama, sir?” El asked.

“Oh, should be enough to float your little boat, ma’am,” came the answer.

That was the beginning of a nice chat between El and the tow captain. He let us know that there were “precious few” tows still on the Alabama. They formerly hauled gravel, coal and fuel oil but the “traffic is down to a trickle” the skipper said, with a hint of nostalgia in his voice.

El asked if there was any fuel along the river. We had left Mobile with full tanks, but it was a long way up to the first indicated marina on our charts. “No, ma’am. Mighty lonely up that lil’ river. Not much of nothing up that way. Maybe ask at the first lock. You all be careful. You hear, ma’am, you all be careful!”

We weren’t sure what he wanted us to be careful of, and we were afraid to ask, so we parted ways — and were careful.

We were some 46 miles above Mobile when we took the right fork at the junction of the two rivers. Our charts indicated another 134 river miles on the Alabama to reach the first marina with gas. Our range, with twin Honda 40s and our 40-gallon tanks, is 170 miles. This is, however, on flat water, and we had a 2-knot current against us. Even for the mathematically challenged, it was obvious we weren’t going to make it.

We weren’t concerned, though, since our river guide gave a telephone number to call at the first lock, 72 miles upstream. A local chap brings fuel down to the lock for a minimum charge, said the book. There was a tone of confidence in that statement. That should have set off a warning bell.

But it didn’t, and we slept well in an oxbow off the river that night.

The next morning was beautiful along the river. The banks glowed yellow with spring flowers. Navigation required full attention, however. There were drifting logs as large as our boat and numerous wing dams placed in the river by the Corps of Engineers to concentrate the river flow and scour the channel. The dams were set at right angles to the river and marked by navigation marks. Spring floods, however, had swept away some of the marks, so it was necessary to study the flow of the river to be certain we didn’t strike a dam.

We arrived at the first lock and dutifully called the number to have the necessary gas delivered to the river for us. Disconnected! Panic slowly rose in our chests. This was one lonely river, and we had seen only a few fishermen since leaving Mobile. No towns, no houses — nothing but Alabama forests and alligators. El radioed the lock operator and explained our situation. 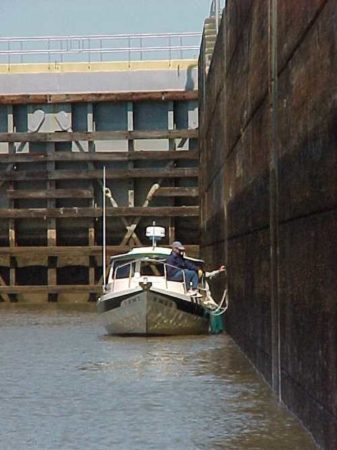 “Dun’ know, ma’am. No gas here. Next gas is above the next lock at Sand Creek.”

“We can’t make it that far on our fuel,” El answered. “Is there anything near here?”

When we pulled up to the lock door, we could see there wasn’t much traffic on this river. It was covered with greenery.

We locked through, and the lock tender gave us a happy wave as we headed north toward oblivion. There was no choice. We stopped along the bank and walked up to the campground. Fortunately, Garland Smith had a few gallons in the tank of his bass boat, and he had a four-stroke engine, so it was oil-free. I was standing along the bank, knee-deep in vegetation-clad water, draining his spare fuel into our tank when Garland mentioned absently, “…alligators and snakes.”

He mumbled, “Well, the alligators probably won’t bite, but the moccasins can be pretty thick along here and they’re mighty territorial and aggressive. Why, just this morning my wife shooed one off our site.”

Never has a tank of gas been poured so quickly into a boat. I scrambled up the bank, paid him a few dollars for his extra gas, and climbed back aboard with a sigh of relief.

Now all we had to worry about is whether it would be enough gas to get us to Sand Creek.

We ran out of daylight before we ran out of fuel. We hooked along the bank of the river just 8 miles below the lock and 9 miles below Sand Creek. We had seen only one boat since leaving Garland.

The next morning, it was foggy and still. We pulled the hook and continued up river with only one engine running. Within a mile, it quit. That tank was drained. We dropped the other engine and slowly chugged up against the current. Our GPS counted down the tenths of miles and the minutes to our destination — it seemed interminable.

Finally, through the mist we spotted the lock. El radioed to have the door open for us, warning that we didn’t have a drop of gas to spare. The door was open, and there, on the right abutment, sat the waiting committee.

Well, we made it into Sand Creek Marina, and we’ll never know why. We have two 20-gallon tanks and we took 43.5 gallons of gas! 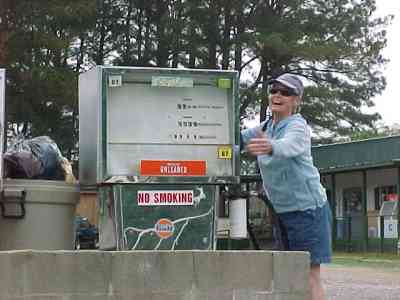 Tanks full, we could again relax and enjoy the river. Now, in the upper stretches, there were towns, houses, boat ramps and state parks. This is a river that is saturated with history — and some of the events we’re old enough to remember!

We had been staying in touch with Pat by e-mail or cell phone on our journey, and when we locked up the last lock and were a day out of Montgomery, we called to let him know all was well and we were almost “home.” He decided to take the day off, get in his 16-foot Jabez and join us for the last miles. Being the adventurous type, he came down river in the dark to meet us at our anchorage 31 miles below town. We homed in using the VHF and a spotlight, shared an evening on the river and headed to Montgomery the next day. We had cruised every mile of Alabama’s 1,428 miles of navigable river — and loved it!

Get the Book
You can order “Halcyon Days: Cruising America” by Bill and Ellen Fiero as a Kindle ebook on Amazon.com for $2.99. The 327-page book is both a how-to and a travel blog, capturing the stories, philosophy and wisdom of cruising along the inland waterways.