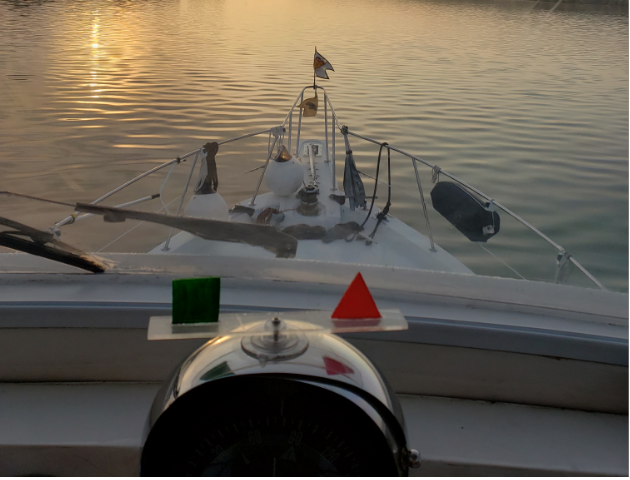 On inland rivers, constant use is made of navigation aids placed both on the water and on the shore. Most buoys and navigation lights are established and maintained by the Coast Guard, but there are also many private navigation lights marking water intakes, docks, piers and other waterfront facilities. These private lights can be valuable in reaches where government lights have not been established.

Buoys are placed to mark the channel and to mark obstructions lying close to the channel. The most common types are red nun buoys and black or green can buoys. Looking downstream, a nun will always mark the left side of the channel and a can will mark the right. They should not be passed too closely, as there’s a possibility of fouling the mooring cable or going aground if the buoy has shifted. 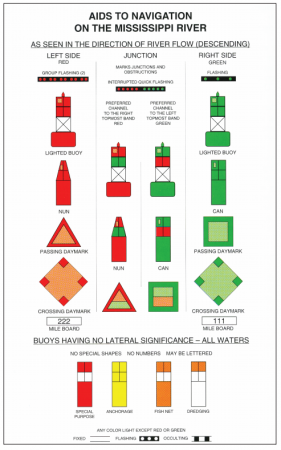 Sunken barges or other obstructions are sometimes marked by temporary light buoys. These may show a quick-flashing white or red light on the left side of the channel and white or green light on the right side — or may be only an oil drum with a lantern.

Other buoys include radar buoys placed above some dams and above and below bridge piers to return a strong radar echo for commercial craft in low-visibility conditions. Special-purpose buoys, orange and white horizontally striped, are often placed by private interests to mark construction, dredging or submerged hazards. If the purpose of a buoy is not immediately apparent, it should be given a wide berth in passing.

Lights and daymarks are placed along the shore and are used mainly as a reference to the chart to determine the run of the channel with respect to the aid. Navigation lights are red on the LDB and green on the RDB, and may be fixed or flashing. All daymarks are reflectorized and can be picked up at night with a spotlight at a considerable distance. Those on the left bank have red reflectors, while those on the right bank have green. Lights and daymarks also carry number boards, giving the mileage at that particular location. 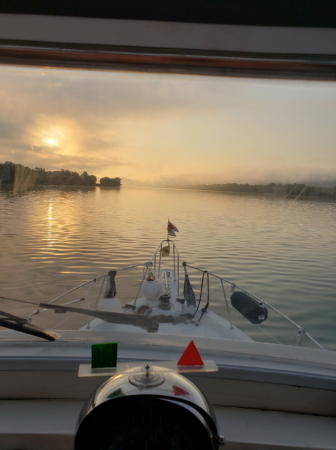 Typical buoys and daymarks are shown in a chart above accompanying this article. Federal law prohibits mooring to, tampering with, or otherwise damaging or obscuring any aid to navigation.

Bridges are marked with a green light at the center of the channel span, and red lights mark the piers. On some bridges, the navigation span is further marked with three white lights in a vertical line. 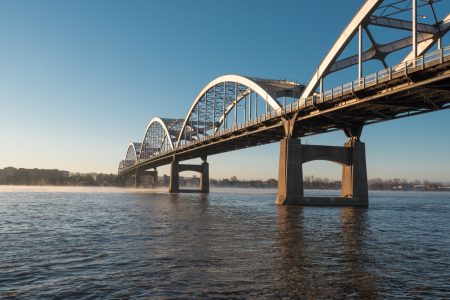 Locks have three green lights in a vertical line at the upstream end of the riverward lock wall and two green lights on the downstream end. Each end of the landward wall is marked with a red light.

Dams are marked with buoys above and below the structures, which mark the restricted area in which boats may not operate. The buoys are orange and white horizontally striped. Note that buoys marking the dams are usually removed in the fall to prevent their destruction by ice.

When traveling on the river, always know your position and the location of the next lock and dam. It’s often impossible to see a dam from upstream, and most boaters who go over one either didn’t know it was there or thought it was farther away.

For a complete list of dams and bridges on the inland waterways, they can be found in the printed edition of Quimby’s Cruising Guide here: https://quimbyscruisingguide.com/products/quimbys-cruising-guide-2020/