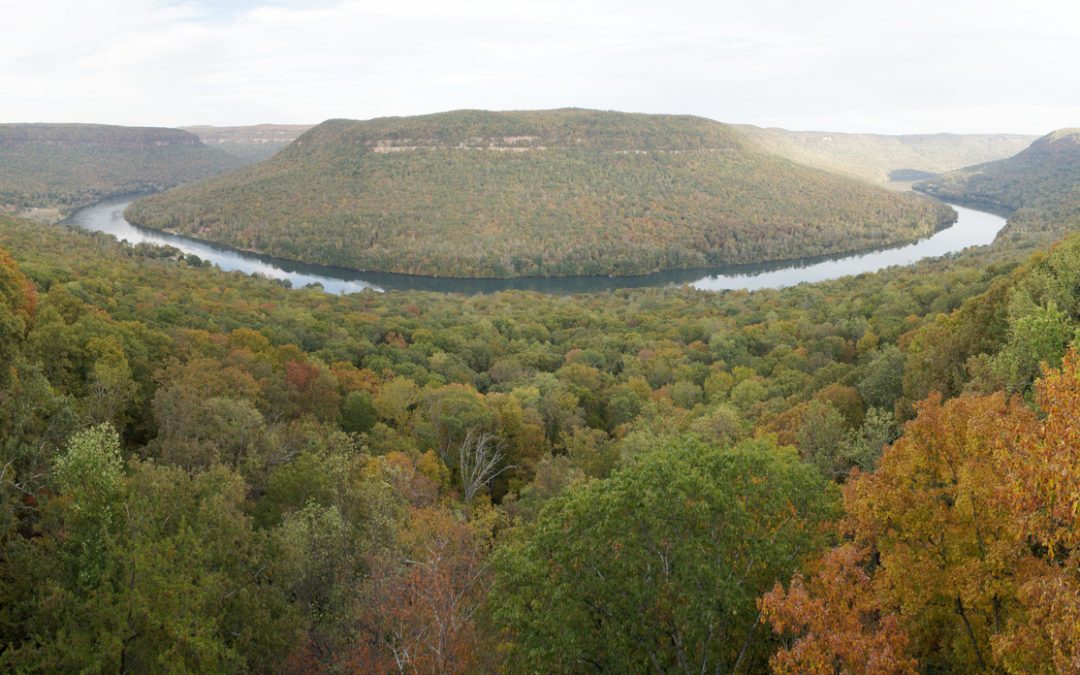 Many boaters know about America’s Great Loop, the 5,500-mile water route around the eastern half of the US. However, there is also another fabulous — although smaller and much less known — loop in the interior of the country that is ideal for trailerable cruisers. The 1,043-mile trip down the Tennessee River, up the Ohio, and then up the Cumberland River to the head of navigation makes an ideal two-week trip for a 20 – 25ft boat that cruises at 25-30 mph. The beginning and the end are separated only by about two hours of car driving, thus being close to a complete water loop and not needing to re-travel the route backwards. Because of the proximity of the start and finish, returning to or prior placing of the car/trailer at your boat’s destination is not a difficult task.

The first part encompasses the entire navigable Tennessee River, 652 miles from slightly upstream from Knoxville Tennessee, south into Alabama, back north through Tennessee, and then all the way through Kentucky to Paducah, on the Ohio River. The Tennessee and Cumberland Rivers closely parallel each other for a surprising distance considering their significant size. As a result, the Tennessee outflow into the Ohio is only 13 miles downstream of where the Cumberland enters. One follows the Ohio for this brief distance before beginning the 381-mile trip up the Cumberland, for a total trip of 1,043 miles.

A 20 – 25ft cruiser typically travels at 25-30 mph. By cruising somewhat more than 3 hours per day, one can easily cover 100 miles and still leave plenty of time to swim, explore, cook, or whatever else is of interest. There are abundant available anchorages or stay in marinas if that is more to your choosing. At this pace, one can make the trip in 11 days or take two weeks and relax a bit more. Those familiar with the America’s Great Loop know that it contains numerous narrow channels and slow/no wake zones which make traveling at 30 mph impossible.  However, most of this Little Loop is water behind dams making for relatively wide water, as well as usually a distance from developments. Thus, planing speed is possible over much of the route.

The closest marina to the headwaters of the Tennessee is Volunteer Landing in downtown Knoxville. Put your boat in here at mile marker (MM) 648 — and to include all the Tennessee River in your adventure — cruise 4 miles upstream to the Forks of the Tennessee, where the Holston and the French Broad join to form the Tennessee at MM 652.

For the first day, cruise about 50 miles downstream to Fort Loudon Dam and stay overnight at Fort Loudon Marina, or anchor out in one of the surrounding coves on Lake Fort Loudon or nearby Lake Telico. The next day go into Fort Loudon Lock and be lowered 70’ into Watts Bar Lake. Prior to the first ‘locking through’, one may be intimidated by the process. However, with a bit of preparation one can easily make it through without distress. Most locks on these rivers have floating bollards around which one wraps a line after entering the lock. The bollard floats up or down with the water level and your boat. After the water level reaches its new level, the lock master blows a horn, you unwrap the line around the bollard, and motor out.  A convenient method is to have a line attached near the bow and stern with some available slack in it. Put out bumpers, wrap the line around the bollard near the center of the boat and then tighten up the slack. This will keep the boat stable, centered on the bollard and protected from scraping the lock wall. 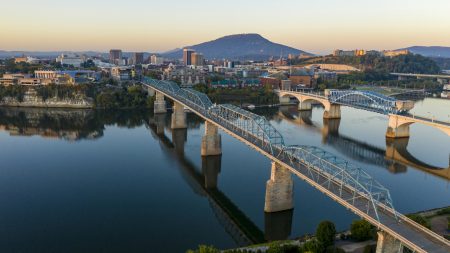 After it widens, the waters of Watts Bar Lake stretch out ahead into a scenic, serene and relatively unpopulated setting. After going through the next dam, one is on Chickamauga Lake and one passes by Chattanooga and into the Tennessee River Gorge — a beautiful natural cut through 26 miles of the Cumberland Plateau in Alabama. This is followed by Nickajack, Gunthersville, Wheeler, Wilson, and finally Kentucky Lake on the Tennessee.  Kentucky Lake is on the west side of Land Between the Lakes National Recreation Area — a 170,000 acre preserve with numerous remote and scenic anchorages. After going through the lock at Kentucky Dam, the water runs free into the Ohio River at Paducah, Kentucky. This last stretch of the Tennessee has many commercial tow (actually ‘push’) boats with most having a large number of barges in tow. These craft are fascinating to see but not a particularly difficult to avoid. You will likely learn to call them on the radio and agree to pass each other on the ‘1’ (their boat on your port side) or the ‘2’ (their boat on your starboard side).

Paducah installed a 340’ slip transient boat dock in 2017 which has nine pedestals with power and water — making this a convenient and interesting overnight stop. Alternately, proceed 13 miles up the Ohio and anchor out at a beautiful anchorage at the mouth of the Cumberland. 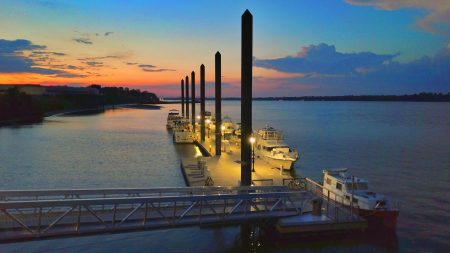 The Cumberland is free flowing until one comes to Barkley Lock, elevating 75’ up into Lake Barkley — which is at the same level as Kentucky Lake on the Tennessee. The Barkley Canal has been built between these two lakes and thus — if there is long wait for commercial traffic entering the lock at Kentucky Dam — one has the option of going through the Barkley Canal, and then down the Cumberland and Ohio to reach Paducah.

After leaving the Ohio, one heads upstream on the Cumberland, through the lock at Barkley Dam and then enters Barkley Lake. One then passes through a series of lakes — Cheatem Lake, Old Hickory Lake, and Lake Cordell Hull. The stretch through Cheatem Lake has a relatively constant width and one has the impression actually being on a river although there is still plenty of distance across for rapid cruising. This portion of the Cumberland goes through downtown Nashville, and with several available marinas, provides a convenient opportunity to explore the Country Music Capital. On the eastern outskirts of Nashville, one goes into Old Hickory Lake, which fronts the estates of many Country Music celebrities. When one goes through Old Hickory Lock be sure to tell the lockmaster that you want to go through the lock at Cordell Hull Dam the next day (or later). Cordell Hull Lock has little traffic and thus is not manned continuously. However, it will open with a day’s advance notice and Old Hickory Lock makes a convenient point to provide this notification. After rising 53’ in Cordell Hull Lock at MM 313.5, one is truly in the upper reaches of the Cumberland which is quite remote. Much of this region appears much as it would have looked some 200 years ago when Daniel Boone and other early pioneers explored the area.  And, in one interesting spot, the layered limestone cliffs are angled in such a way that it appears that the river is going uphill. 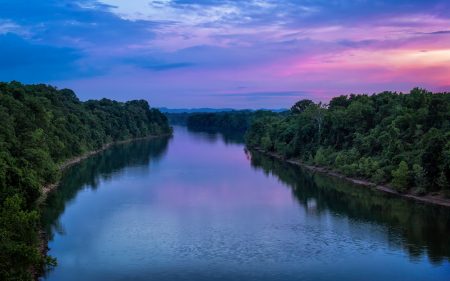 Continue another 67.5 miles above Cordell Hull Dam and one reaches the head of navigation at MM 381. However, one should stop for fuel after going 4 miles upstream from Cordell Hull Dam at Defeated Creek Marina, MM 317. Upstream of Defeated Creek it is quite isolated, and no fuel is available. Thus, a suggested plan is to fuel up there, cruise upstream to the head of navigation at MM 381, return some distance staying overnight at an anchorage and come back to Defeated Creek the next day. Note that the round trip from Defeated Creek is 128 miles. However, most relatively small cruisers will hold at least 60 gallons, and at 3 mpg one can readily make the distance. However, paying attention to fuel level in this region is a necessity.

Defeated Creek has an excellent ramp for launching and retrieving a boat and cottages are available for overnight rental in the event one needs a real bed break or an opportunity for a shower.

Uber and Lyft online say they can provide a ride in the range $150-$250 for the 136-mile trip back to Knoxville to pick up your car and trailer.  It would be best to check ahead of time to confirm availability.

In order to successfully find your way on the rivers, one should have a set of navigation charts — either hard copy or electronic. The Army Corps of Engineers no longer publishes paper charts but makes them available as pdf files for download. A few used copies of these charts are available online. Although we had a set of paper charts, we primarily used a Garmin 700 Series (7” diagonal) Chartplotter coupled with a depth sounder. Computer chips containing maps of the entire route are available. All of the route is marked by buoys, but in some stretches these buoys are a long distance apart and difficult to locate by sight. A laptop with appropriate charts and GPS receiver can alternately be used — and for a backup — put Navionics charts on your phone or tablet. In addition, Quimby’s Cruising Guide (https://quimbyscruisingguide.com/store/https://quimbyscruisingguide.com/) is an excellent source of anchoring and marina information. 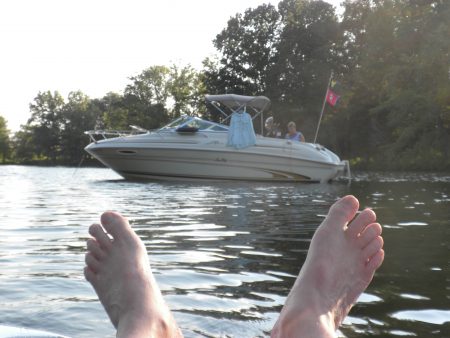 Many working folks take a two-week summer vacation, and this is an outstanding cruise that fits nicely into this window. You don’t need to wait until you retire to begin cruising but take the Little Loop before later taking on the much greater time commitment of America’s Great Loop. Opportunity awaits, so as the Loopers say, “haul anchor and cruise!”.